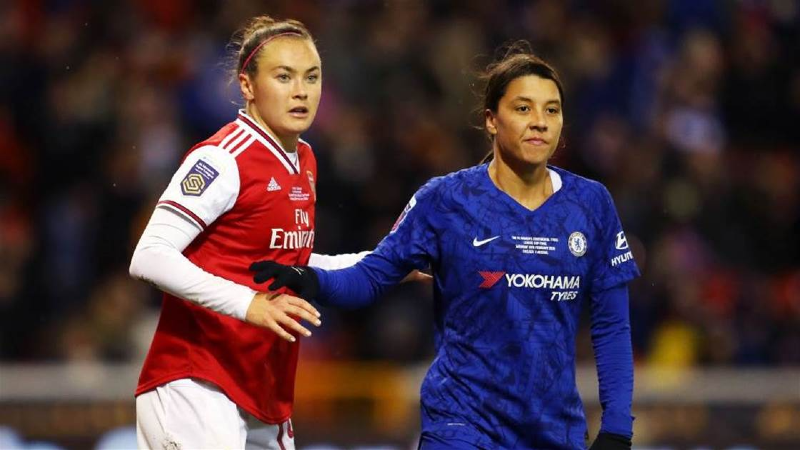 Sam Kerr was involved in Chelsea’s second goal as they clinched a spot in the Women’s English FA Cup with a 2-0 win over Arsenal in their semi-final on Sunday.

Kerr collected a ball into the box, forcing her way forward, before a deflected clearance fell to Ji So-Yun to fire in Chelsea’s second goal.

Caitlin Foord started and played 71 minutes while Lydia Williams was an unused substitute.

Kerr’s Chelsea will take on Alanna Kennedy and Hayley Raso‘s Manchester City in the decider after they got past Mackenzie Arnold and Tameka Yallop‘s West Ham United 4-1 on Saturday.

Kennedy and Arnold both played full games in Saturday’s semi-final, while Yallop got through 73 minutes and Raso was a 62nd minute substitute.

In France, Ellie Carpenter played a full game as Olympique Lyon won 2-1 at Fleury 91 to maintain their five-point league lead in the Feminine Division 1. Elsewhere, Mary Fowler played the first half in Montpellier’s 3-1 loss to Paris FC.

In USA, Emily van Egmond put in a full shift in the NWSL Challenge Cup for San Diego Wave in a 3-2 loss to Portland Thorns.

Angela Beard scored a double and Indiah-Paige Riley also netted as Fortuna Hjorring won 4-1 over Brondby in the Danish Kvindeliga. Beard and Riley both played full games, while Clare Wheeler played the first half.