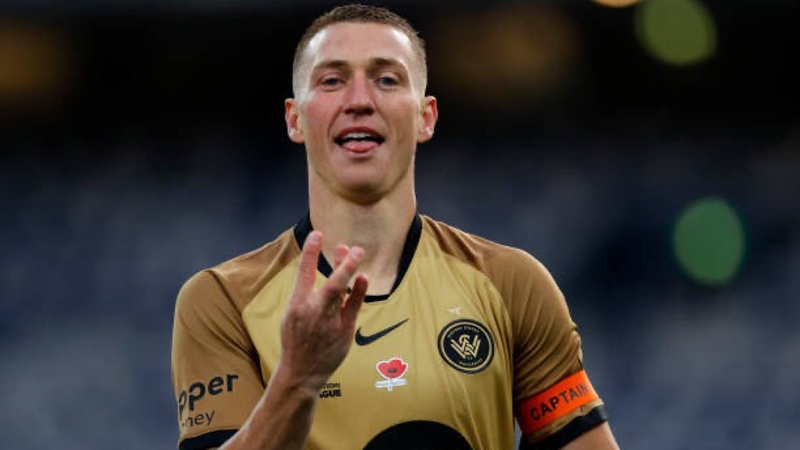 Mitch Duke made it two goals in two games for Fagiano Okayama in a 1-1 draw with Albirex Niigata in the Japanese J2.League on Sunday.

Duke, who started and played 88 minutes, equalized in the 29th minute. Stefan Mauk also got through 79 minutes.

The Socceroos forward brought down a lofted diagonal ball into the box with his head, before a striker’s finish, poking in at the near post.

Ajdin Hrustic started and played 58 minutes as Eintracht Frankfurt went down 2-0 to Union Berlin in the German Bundesliga on Sunday.

Aziz Behich put in a full shift as Giresunspor drew 0-0 with Besiktas, while Awer Mabil was an unused sub for Kasimpasa’s 4-0 win over Adana Demirspor in the Turkish Super Lig on Sunday.

Tom Rogic “struggled to get into the game” as he was handed a 5/10 rating for his 58-minute display in Celtic’s 2-1 extra-time Scottish FA Cup semi-final loss to Rangers on Sunday.

The Daily Record wrote: “Struggled to get into the game as the frantic pace kept his influence to a minimum. Peripheral figure and hustled and bustled out of possession as he came in for some rough treatment from Bassey in particular. So often the architect of Celtic’s big moments on the grand stage but not on this occasion.”

Nathaniel Atkinson helped Hearts clinch a spot in the final with a full game in their 2-1 win over Hibernian in the other FA Cup semi-final on Saturday. Cam Devlin returned from injury as an 87th minute substitute too.

Atkinson earned a 6/10 rating from the Daily Record, who wrote: “Heavily involved in the opening period when his pressing forced Hibs on the retreat. Tucked in for a more disciplined role after the interval as Hearts were the ones who had to dig it out.”

In England, Kenny Dougall earned a 7/10 rating from Lancashire Live for his full game in Blackpool’s 2-1 loss to West Bromwich in the Championship.

Lancashire Live wrote: “A bit slack in the first half but improved in the second and played out well under pressure.”

In League One, Bailey Wright earned a 6/10 rating from Sunderland Echo as Sunderland won 3-2 over Shrewsbury to boost their promotion playoffs hopes.

The Sunderland Echo wrote: “Steady defensively and won the bulk of his duels against Bowman.”