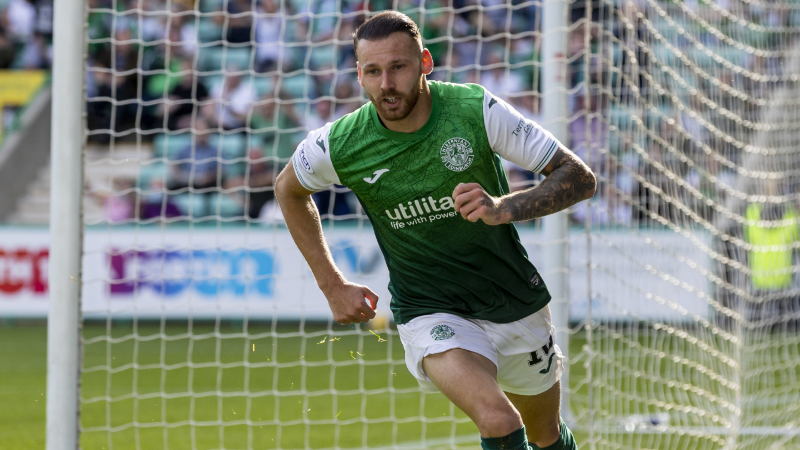 Martin Boyle scored again for Hibernian while Jackson Irvine made his starting debut in Germany and Denis Genreau got an assist in France’s Ligue 2.

Martin Boyle took his season goals’ tally to eight with a strike in Hibernian’s 2-2 draw with St Mirren in the Scottish Premiership on Saturday.

Boyle, who played a full game, netted from the spot in the 61st minute to put Hibs 2-1 up.

The lively Socceroo earned a 6/10 rating from the Edinburgh Evening News who wrote: “Had one of his quieter afternoons but kept his cool to drill home the penalty which put Hibs in front.”

Boyle actually got his penalty chance after Australian Matt Millar pulled down Ryan Porteous inside the box. He blazed his spotkick powerfully high into the back of the net.

Australians Ash Maynard-Brewer and Cameron Devlin made their debuts for Ross County and Hearts respectively in a 2-2 draw.

Maynard-Brewer, standing in for regular number one Ross Laidlow, impressed on debut too, winning BBC‘s Man of the Match award.

The BBC wrote: “The County keeper could do nothing about the two goals he conceded and had a fine debut on the whole, making a string of eye-catching saves that proved valuable in the end.”

Devlin was a 56th minute substitute for Hearts.

Tom Rogic started and played 72 minutes as Celtic were shocked 1-0 by Livingston.

Harry Souttar put in a full shift and received a 6/10 rating as Stoke City went down 2-1 at Derby County in the English Championship on Saturday.

Callum Elder got a 5/10 rating for his full shift as Hull City lost 3-1 at home to Sheffield United. The Hull Daily Mail wrote: “Workmanlike display from the Australian international on what proved to be a tough afternoon for City.”

In League One, Bailey Wright returned to the Sunderland starting line-up and played a full game in a 2-2 draw at Fleetwood Town.

Wright earned a 6/10 rating from the Sunderland Echo who wrote: “Started the game very well but did give Morton a few openings through the contest.”

Ajdin Hrustic was an 83rd minute substitute for Eintracht Frankfurt in a 1-1 draw away to VfL Wolfsburg in the German Bundesliga on Sunday.

Jackson Irvine made his starting debut for St Pauli, putting in a full shift as they won 4-1 over Ingolstadt in the 2.Bundesliga.

Denis Genreau started and played a full game as Toulouse won 4-1 over Grenoble, who had Alex Gersbach on the bench, in the French Ligue 2 on Saturday. Genreau got the assist for Rhys Evitt-Healey’s opening goal for Toulouse.

Bruce Kamau started but was replaced at half-time as OFI came from 3-0 down to draw 3-3 with AEK Athens in the Greek Super League on Sunday.

Anthony Kalik scored the opening goal of the game as HNK Gorica lost 3-2 away to Osijek in the Croatian Prva HNL on Sunday. Kalik, who started and played 61 minutes, netted in the 29th minute.

Milos Degenek played a full game as Red Star Belgrade drew 1-1 with Partizan in the eternal derby in the Serbian Super Liga on Sunday.