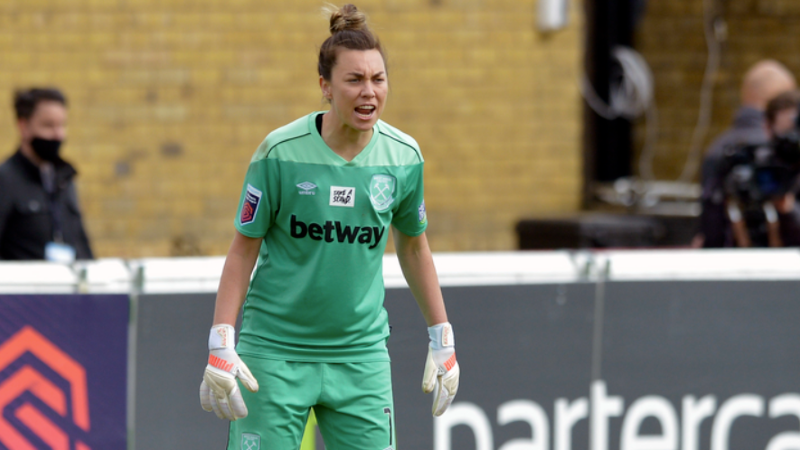 Mackenzie Arnold starred with a string of fine saves including a few to deny Caitlin Foord but it wasn’t enough for West Ham United as top-of-the-table Arsenal won 4-0.

Arnold made a sharp block to deny Foord from a 21st minute header, while she was also alert after the Matildas forward danced forward and tested her at the near post.

The Matildas deputy keeper shone in the 58th minute with a stunning tip on to the bar from Beth Mead’s effort.

Arnold won praise from West Ham boss Olli Harder who said: “Mackenzie hasn’t been back long since being away with Australia during the international break and she had a great performance today.”

Tameka Yallop along with Arnold both played full games for the Hammers. Foord played 62 minutes, with Steph Catley getting 15 minutes off the bench while Lydia Williams was an unused sub.

Hayley Raso was back after injury but left on the bench alongside Alanna Kennedy as Manchester City won 4-1 at Leicester City.

Sam Kerr was a 72nd minute substitute and scuffed her only chance as Chelsea won 1-0 at Aston Villa.

Emily Gielnik is still out for Villa with injury but was said to be a “few days away” from returning in the lead-up to the game by manager Carla Ward.

Clare Polkinghorne maintained her incredible recent scoring form with the second goal in Vittsjo’s 8-2 win over Orebro in the Swedish Damallsvenskan.

The Matildas defender has netted four times in her past five games for club and country.

Beattie Goad came off the bench to score Granadilla Tenerife’s third goal in a 3-0 win at Sporting de Huelva in the Spanish Feminina Primera Division.

Goad netted her first goal for Tenerife in the 86th minute, having entered the fray two minutes earlier.

Jenna McCormick put in a full shift but scored an own goal as AGF went down 4-1 to Brondby in the Danish Kvindeliga.