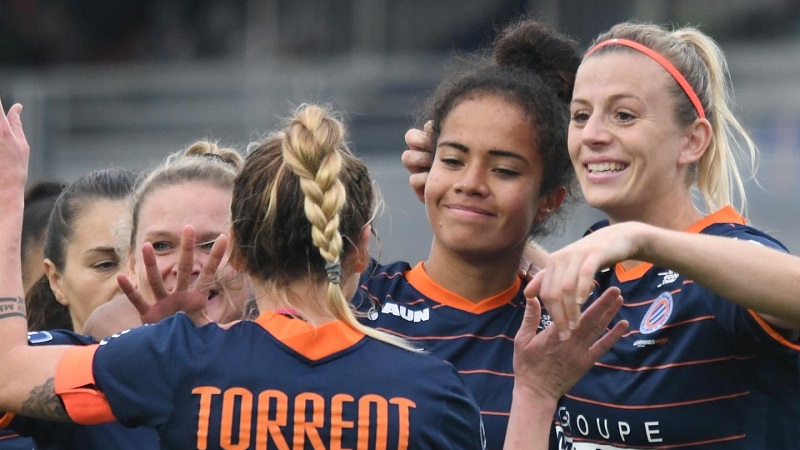 Mary Fowler was the super-sub, coming off the bench to score two goals as Montpellier triumphed 3-0 over Issy in the French Feminine Division 1 on Saturday.

Fowler entered the game in the 59th minute with her side 1-0 up, but it only took her two minutes to double their lead.

The teenage Matildas talent added another goal in the 63rd minute, meaning she has scored six goals for either club or country since September.

On Sunday, Ellie Carpenter put in a full shift at full-back as Olympique Lyon claimed an important 6-1 win over title rivals Paris Saint-Germain. Carpenter got the assist for the fifth goal from Ada Hegerberg.

Sam Kerr scored again as Chelsea crushed Manchester City 4-0 on the road in the Women’s Super League on Sunday.

The Matildas skipper volleyed home on the stroke of half-time, after Ji So-Yun crossed for Guro Reiten on a fast break.

Kerr swooped on an errant pass in the second half to set up a chance for Fran Kirby, while her deflected volley was saved too.

Kerr played 67 minutes before being replaced, while Hayley Raso returned from injury as a 79th minute substitute for City. Alanna Kennedy went unused.

Kyah Simon came up against Steph Catley as Arsenal netted a late equalizer to earn a 1-1 draw with Tottenham on Saturday.

Simon started in an attacking role on the left side, playing 80 minutes including a left-foot volley from outside the box which went wide, while Catley put in a 68-minute shift at left back for the Gunners.

Mackenzie Arnold couldn’t keep out a late effort as West Ham United fluffed a two-goal lead to draw 2-2 with Reading.

Arnold put in a full shift but was beaten by an own goal and low near-post Emma Harries effort.

Tameka Yallop also played a full game, having a second-half volley cleared off the line along with a glancing header go wide.

Emily Gielnik was still absent for Aston Villa who won 1-0 at Birmingham City.

Clare Wheeler got on the scoresheet as Fortuna Hjorring won 2-0 at KoldingQ in the Danish Kvindeliga on Sunday.

Wheeler, who netted in the 54th minute, played a full game along with Angela Beard, while Indiah-Paige Riley started and played 59 minutes. Alexandra Huynh was unused.

In the UEFA Champions League in midweek, Steph Catley netted her first-ever Arsenal goal in a 4-1 win at Koge.

Catley opened the scoring with a left-foot free-kick, while Caitlin Foord also netted with a header from a rebound after a shot had cannoned off the crossbar. Lydia Williams also got a rare start, playing a full game.

Ellie Carpenter put in a full shift as Olympique Lyon got past Bayern Munich 2-1, while Dylan Holmes was unused sub as Hacken won 1-0 at Benfica.

Sam Kerr scored a double and got two assists as Chelsea won 7-0 over Servette, who had Tessa Tamplin put in a full shift.