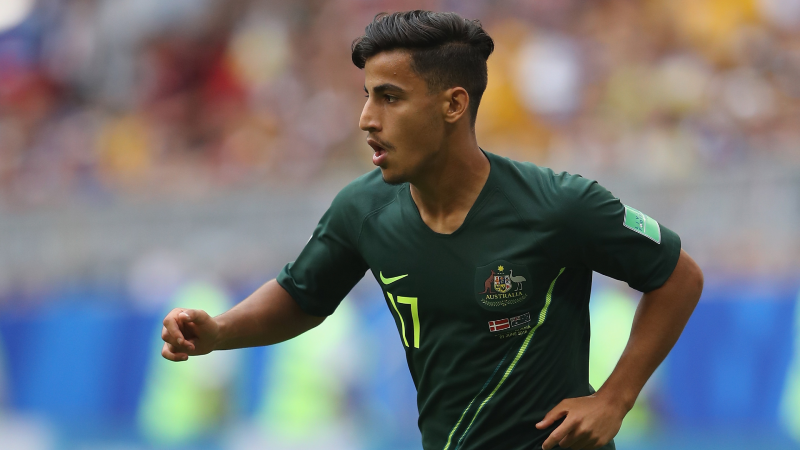 Daniel Arzani was sent off in the Belgium second tier after copping a second booking for a raised elbow as Lommel lost 3-1 to Excelsior Virton.

Arzani, who had entered the game in the 53rd minute with his side 3-1 down, picked up a yellow card in the 68th minute.

The on-loan Manchester City winger was given his marching orders after swinging his arm back on Virton’s Jamal Aabbou in the 75th minute.

The 22-year-old has made eight appearances for Lommel this term, including six starts, but is yet to score.

Mat Ryan was on the bench as Real Sociedad remained top of the Spanish La Liga with a 2-0 win at Osasuna on Sunday. Ryan has two league appearances for Sociedad, most recently a clean sheet against Celta Vigo 10 days ago.

Ajdin Hrustic missed Eintracht Frankfurt’s 2-1 win at Greuther Furth in the German Bundesliga on Sunday with a minor injury, which is a worry ahead of Socceroos duty.

Jackson Irvine‘s St Pauli had their 2.Bundesliga match on Sunday with Sandhausen postponed due to a spate of COVID-19 cases within the opposition squad.

Lawrence Thomas was dropped to the bench for SonderjyskE as they lost 3-1 at Vejle in the Danish Superliga, while Awer Mabil was absent as FC Midtjylland lost 3-0 at AGF, who had Zach Duncan play 10 minutes off the bench.

Massimo Luongo was back in the Sheffield Wednesday squad after almost three months out with a hamstring injury. Luongo was an unused sub for Wednesday’s 0-0 FA Cup draw with Plymouth, after playing 45 minutes in the reserves in midweek.

Harry Souttar put in a “strong performance”, during a full shift as Stoke City triumphed 1-0 at Luton Town in the English Championship.

The Stoke Sentinel rated Souttar 8/10 and wrote: “A strong performance in middle of back three, winning challenges, and doing what is necessary.”

Riley McGree played 69 minutes, earning a 7/10 rating from the Birmingham Mail in a 2-1 home loss to Reading.

The Birmingham Mail wrote: “His display was what is becoming trademark McGree, busy, inventive, positive. Found space, not afraid to have a shot, distribution good.”

Callum Elder played a full game and earned an 8/10 rating as Hull City won 2-0 at Barnsley.

The Hull Daily Mail wrote: “Good in the first half particularly going forward and that continued in the second half, a solid display.”

Cameron Devlin provided an assist and earned an 8/10 rating as Hearts thrashed Dundee United 5-2 in the Scottish Premiership.

Football Scotland wrote: “Arguably his best game so far. Did the dirty stuff but also helped create and showed some lively touches.”

Nikita Rukavytsya scored a 90th minute equalizer for new club Hapoel Be’er Sheva in a 1-1 draw with Ashdod in the Israeli Ligat Ha’Al.

Rukavytsya, who played a full game, has only scored two goals in six games for Hapoel Be’er Sheva but both have come in the past three games in a return to form.

Alex Grant was given a straight red card early in Pohang Steelers’ 2-1 home loss to Gwangju in the Korean K-League on Sunday.

Grant, who has made 16 league appearances for the Steelers this term, was dismissed for a last man tackle, albeit after video review, in the 36th minute.