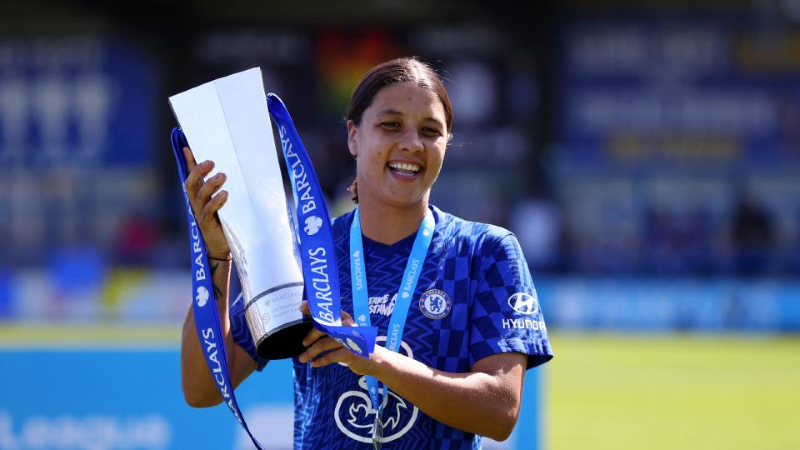 Kerr’s Chelsea trailed 2-1 when the Matildas captain produced an expert left-foot volley from the edge of the box to equalize in the 46th minute.

Guro Reiten had put the Blues ahead before Kerr sealed the crucial win with a stunning 66th-minute volley from range with United keeper Mary Earps off her line.

The win meant Chelsea won the league title by one point from Arsenal.

Steph Catley was on the scoresheet as the Gunners ensured Chelsea needed to win, with a 2-0 victory over West Ham United.

Catley rifled in a left-foot shot after pouncing on a loose ball and driving into the box in the 66th minute for her first-ever WSL goal.

Hayley Raso went on a trademark run before winning Manchester City a penalty in their 4-0 triumph at Reading which sealed third spot and UEFA Champions League football.

Raso was a 74th minute substitute before coming on and earning the 90th minute spotkick, converted by Alex Greenwood. Alanna Kennedy put in a full shift for City.

Mary Fowler scored Montpellier’s third goal in the 90th minute as they won 3-1 over Soyaux to move up to fifth in the French Feminine Division 1. Fowler was an 85th minute sub.

Ellie Carpenter put in a full shift as Olympique Lyon moved within a win of the title after a 2-0 win over Paris FC on Sunday.

Clare Polkinghorne was among the scorers as Vittsjo drew 2-2 at Hammarby in the Swedish Damallsvenskan.

Polkinghorne, who played a full game, netted the equalizer in the 82nd minute with a header from a corner. Courtney Nevin and Katrina Gorry also both put in full shifts.