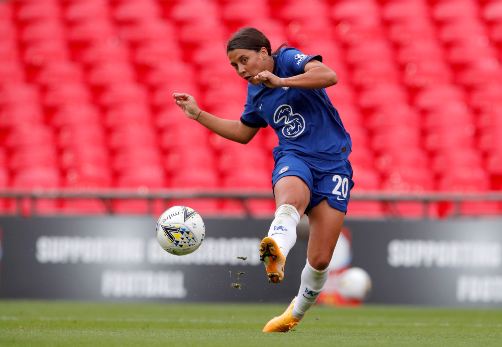 Sam Kerr took her English Women’s Super League tally to 16 goals with a double in Chelsea’s 5-0 win over Reading on Sunday to maintain their grip on top spot.

Ten minutes later, Kerr had a double after working with Reiten in the lead-up before Erin Cuthbert’s low ball found the Matilda for a more convincing side-footed finish.

Kerr has the best goals per minute ratio in WSL history and has netted 23 times in 25 appearances across all competitions this season.

Alanna Kennedy played a full game and Hayley Raso started and played 59 minutes as Manchester City won 2-0 away to West Ham United. Mackenzie Arnold put in a full shift for the Hammers and Tameka Yallop played the first half.

Caitlin Foord provided the assist for Beth Mead’s second-minute opener as Arsenal won 5-0 at Leicester City to keep the pressure on leaders Chelsea.

Foord played 80 minutes, while Steph Catley was a 62nd minute sub and Lydia Williams was unused.

Indian-Paige Riley was among the scorers as Fortuna Hjorring won 4-0 at Thy ThistedQ in the Danish Kvindeliga. Riley played a full game along with Clare Wheeler and Angela Beard.

Ella Mastrantonio played the first half while Aivi Luik was unused as Pomigliano lost 3-0 to Sassuolo in the Italian Serie A Women.

Ellie Carpenter was absent as Olympique Lyon won 2-0 at Guingamp while Mary Fowler played 65 minutes as Montpellier lost 2-1 at home to Stade de Reims in the French Feminine Division.

Clare Polkinghorne played a full game as Vittsjo drew 1-1 with Rosengard who had Teagan Micah in goals and Charlotte Grant come on as an 83rd minute sub in the Swedish Damallsvenskan.

Amy Harrison started and played 82 minutes as PSV won 1-0 over Heerenveen in the Dutch Eredivisie Women.

Karly Roestbakken was a 90th minute substitute as Lillestrom lost 1-0 at home to Brann in the Norwegian Toppserien.