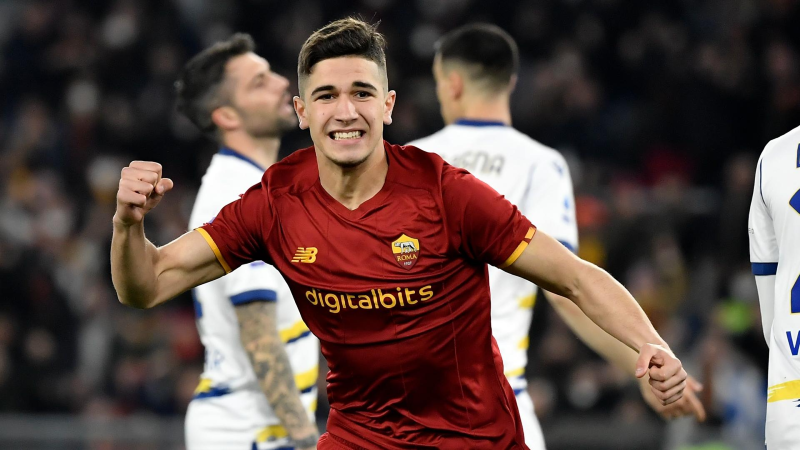 Australian-Italian teenager Cristian Volpato came off the bench to score for AS Roma as they fought back from 2-0 down to draw 2-2 with Hellas Verona in Serie A.

Sydney-born 18-year-old Volpato was brought on by Jose Mourinho in the 62nd minute and fired in a goal three minutes later after a loose ball from a corner fell to him just inside the box.

Volpato, who previously spent time with Western Sydney Wanderers and Sydney FC, was making his second Serie A appearance, having joined Roma in January 2020 and later penning a three-year professional deal until 2024.

Mat Ryan played in Real Sociedad’s 2-2 midweek Europa League draw with RB Leipzig but was back on the bench as his side lost 4-0 at Athletic Bilbao in La Liga.

Despite his recent double, Ajdin Hrustic was an unused sub as Eintracht Frankfurt lost 1-0 at FC Koln in the German Bundesliga.

Awer Mabil netted his first goal for new Turkish club Kasimpasa in a 4-4 draw with Konyaspor in the Turkish Super Lig on Friday night.

Mabil, who joined Kasimpasa on loan from Danish club Midtjylland until the end of the season, entered the fray in the 74th minute and scored in the 91st minute, cutting inside and shooting in at he near post to put his side 4-3 up.

Socceroos newcomer Joel King made his debut for new Danish club OB in their 2-0 loss at FC Copenhagen in the Superliga on Sunday. King started and played 87 minutes at left-back for OB.

Trent Sainsbury grabbed a rare double, netting Kortrijk’s opening two goals as they won 5-0 over Zulte Waregem in the Belgian First Division A.

Sainsbury, who put in a full shift, opened the scoring in the 17th minute with a glancing header from a set-piece and added another in the 44th minute tapping home at the back post from a corner.

Riley McGree impressed off the bench as Middlesbrough went down 2-1 to Bristol City in the English Championship on Saturday. McGree was brought on in the 53rd minute and the Evening Gazette rated him 7/10 for his display.

Callum Elder returned from injury and played a full game as Hull City drew 1-1 at QPR, earning a 7/10 from the Hull Daily Mail who wrote: “Scratchy early on as you’d expect, but settle into it. Caught out a couple of times but reacted positively.”

Nathaniel Atkinson scored his first goal for new club Hearts as they lost 2-1 at St Johnstone in the Scottish Premiership. Atkinson, who put in a full shift, equalized in the sixth minute by slotting home a rebound after Barrie McKay’s low shot hit the upright. Cameron Devlin started and played 65 minutes for Hearts.