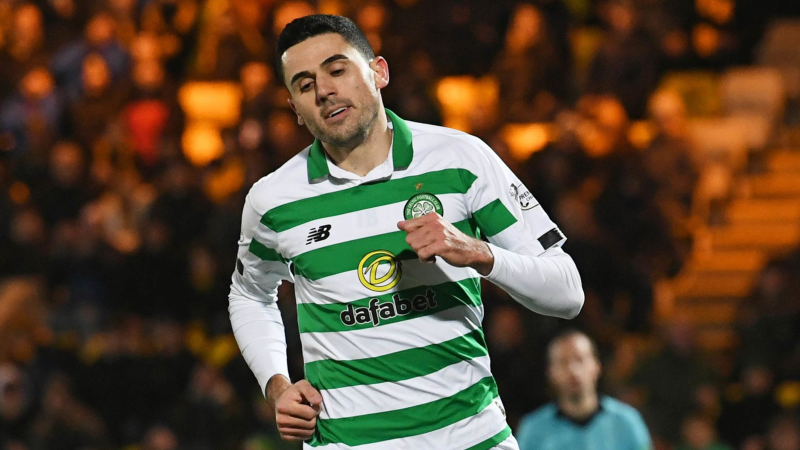 Tom Rogic netted a double and earned a rare 10/10 rating as Celtic hammered Motherwell 4-0 on the road in the Scottish Premiership on Sunday.

Rogic, who has been in outstanding form this season, scored Celtic’s second and third goals in the first half.

The Australian curled in a trademark shot from the edge of the box in the 31st minute, before side-footing home on the stroke of half-time from a cutback.

The Scottish Daily Express rated him 10/10 and wrote: “Looked confident striding forward as always, before sending an unstoppable strike into the top corner after half an hour and scoring a neat finish before the end of the first half.”

Cameron Devlin and Nathaniel Atkinson both started but were replaced after 73 minutes as Hearts were hammered 5-0 by Rangers.

The Edinburgh Evening News gave Atkinson a 4/10 and wrote: “Beaten three times early by Ryan Kent as he struggled defensively. His crossing was also poor and, even though he was unlucky to miss narrowly, he was at tight angle and should’ve knocked it back across goal for Ellis Simms who would’ve had a tap in.”

Devlin didn’t go much better with a 5/10 rating: “A poor, square pass led up to Rangers’ opener. He also missed a great chance to tie things up at 1-0.”

Martin Boyle started life with his new Saudi Arabian club Al Faisaly in style with a goal and an assist in a 3-0 win over Damak on Saturday.

Boyle got the assist for Rossi’s 21st minute strike, before netting himself eight minutes later.

Ajdin Hrustic came on at half-time with devastating effect, scoring a double as Eintracht Frankfurt won 3-2 away to VfB Stuttgart in the German Bundesliga on Saturday.

The Socceroo grabbed the winner in the 77th minute with a shot that deflected in off Konstatinos Mavropanos.

Kenny Dougall provided two assists and earned a 9/10 rating from the Blackpool Gazette as Blackpool won 3-1 over Bristol City in the Championship.

The Gazette wrote: “Controlled the midfield and bagged two assists. Even found time to slam a first-time volley over the bar from the edge of the box.”

Massimo Luongo put in a full shift and earned an 8/10 rating from Yorkshire Live as Sheffield Wednesday lost 2-0 at Burton Albion in League One.

Yorkshire Live wrote: “Alert at the base of midfield on his return to the side. Covered plenty of ground and was neat and tidy in possession. Twice went close to getting on the scoresheet after the break. Booked.”

Reagan Ogle was an unused sub as Hartlepool United were bundled out of the FA Cup 2-0 by Crystal Palace. Tyrese Francois was absent as Fulham went out 4-1 to Manchester City.

Riley McGree wasn’t in the Middlesbrough to debut as they stunned Manchester United 8-7 on penalties after a 1-1 draw.