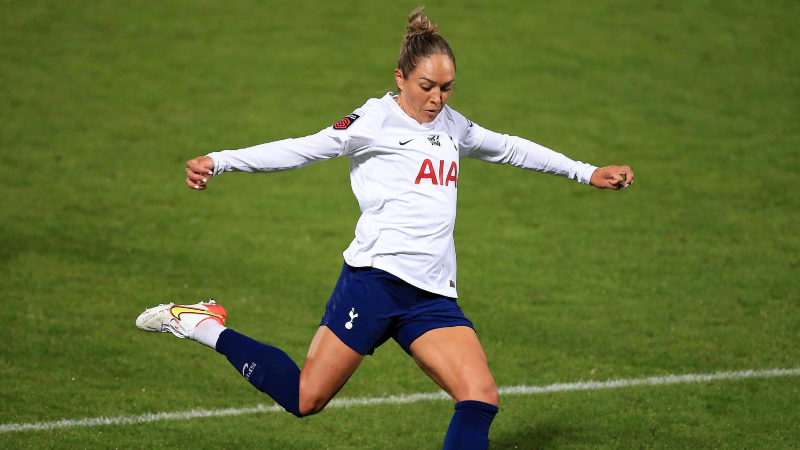 Kyah Simon scored a brace upon her return to the English Women’s Super League after the Asian Cup as Tottenham won 4-0 over Brighton & Hove Albion.

The Matildas forward opened the scoring with a chip in the 12th minute, before rounding out the goals in the 63rd minute.

Mackenzie Arnold made a crucial late save to help West Ham United claim a 2-1 win over Emily Gielnik‘s Aston Villa.

Gielnik started and played 88 minutes while Tameka Yallop was absent for the Hammers after testing positive to COVID-19 at the Asian Cup.

Steph Catley started and played 70 minutes while Caitlin Foord was a 46th minute substitute and Lydia Williams left on the bench as leaders Arsenal drew 1-1 with Manchester United.

Sam Kerr was back in action for Chelsea, starting and playing 81 minutes, as they edged Manchester City 1-0. Second-placed Chelsea are now two points behind Arsenal.

Hayley Raso and Alanna Kennedy were unused subs for City who are sixth.

Ellie Carpenter put in a full shift and provided the match-winning assist as Olympique Lyon beat Bordeaux 1-0 in the French Feminine Division.

Mary Fowler was a 73rd minute substitute as Montpellier lost 1-0 at Fleury 91.

Beattie Goad was an 88th minute sub as Granadilla Tenerife won 1-0 at Madrid in the Spanish Primera Feminina Division.

Aivi Luik played a full game and Ella Mastrantonio was a 76th minute sub as Pomigliano lost 5-2 at AS Roma in the Italian Serie A Women.