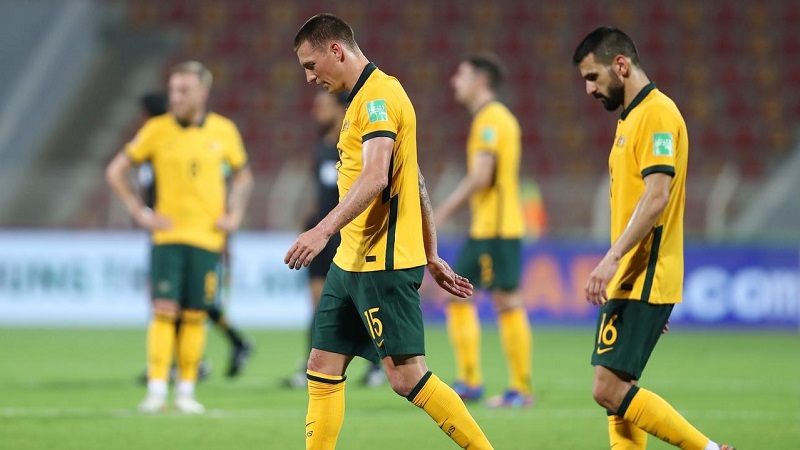 Tuesday’s 2-2 draw with Oman wasn’t the result we were all after. It’s now all but certain that the Socceroos will need to qualify for Qatar 2022 via the back door and that’s daunting with a South American opponent looming, if we get past UAE.

The Oman draw means Australia have managed just one win from their past five qualifiers, which means the side’s record-breaking 11-game qualifier winning streak is a long-gone distant memory.

Australia needed maximum points from this international window of two fixtures against Vietnam and Oman. We only got four.

We also ideally needed the top two, Saudi Arabia and Japan to stumble. They did not, with the Samurai Blue claiming all six possible points and extending their win streak to five games with their 2-0 win over the Green Falcons.

Saudi Arabia’s home win over Oman in their first fixture of the window put them clear at the top.

Now Australia’s only hope of direct qualification is beating both Japan (at home) and Saudi Arabia (away) in their final two qualifiers. That’s hard to imagine on current form.

GGArmy‘s Ben Somerford looks at the good, the bad and the ugly from this international window from a Socceroos lens.

Australia beat up on struggling Vietnam 4-0 to restore some confidence and belief. Tom Rogic dazzled in that game, reminding us of what we missed last time when he was out with injury. Unfortunately he wasn’t able to stamp the same authority against Oman.

Craig Goodwin and Riley McGree both netted their first-ever Socceroos goals against Vietnam too, so there was plenty of feel-good stories from that. But the warm fuzzies soon turned in Muscat, with the frustrating 2-2 draw.

Australia actually could have, and probably should have, been more than one goal up at half-time, with Trent Sainsbury irritatingly caught offside for his early headed goal while Mathew Leckie’s 28th-mnute header was cleared off the line. Rogic also found space inside the box late in the half but had his effort deflected over. The chances were coming but the killer instinct, to put the game to bed, was missing. We’ve seen that before sadly.

It’s worth noting Mooy’s set-piece delivery for both Sainsbury and Leckie’s header. Mooy, like Rogic, reminded us of his quality, having missed the ill-fated Saudi Arabia and China draws.

Australia are clearly the top scoring team in Group B with 15 strikes from eight games, the next best being Saudi Arabia (10) and Japan (nine), but we’ve also conceded six, including two against Oman. We got lucky to avoid conceding any against Vietnam as well, with Mat Ryan’s shoulder to thank for that clean sheet.

Generally, the top sides in this phase of AFC qualifying are better at keeping things tight. Iran and South Korea, both already qualified in the other group, have only conceded two goals each in their eight qualifiers. Japan have only allowed three goals, keeping four straight clean sheets.

Sadly for Australia, there’s a lack of reassurance and quality in defence, but also a level of inevitability about mistakes which we need to eradicate if we’re going to return to being among the AFC’s elite and qualify automatically for World Cups again.

Fran Karacic’s tackle for Oman’s late equalizer was clumsy. It’s arguable if it was a penalty but he was also caught on the wrong side of his opponent which meant the situation was avoidable had he been better positioned.

Not to mount a case against Karacic – he displayed his qualities including a tireless energy to push up and down the flank in both qualifiers – but the lead-up to Oman’s first goal occurred on his side of defence when he was caught out of position too.

We all know this Socceroos side lacks the quality of previous generations. Karacic is an example of that. But positioning isn’t about technical quality, it’s about tactical nous. Those behaviours, particularly in the dying minutes of a crucial World Cup qualifier, should be instilled from above. These recurring mistakes sum up the problem.