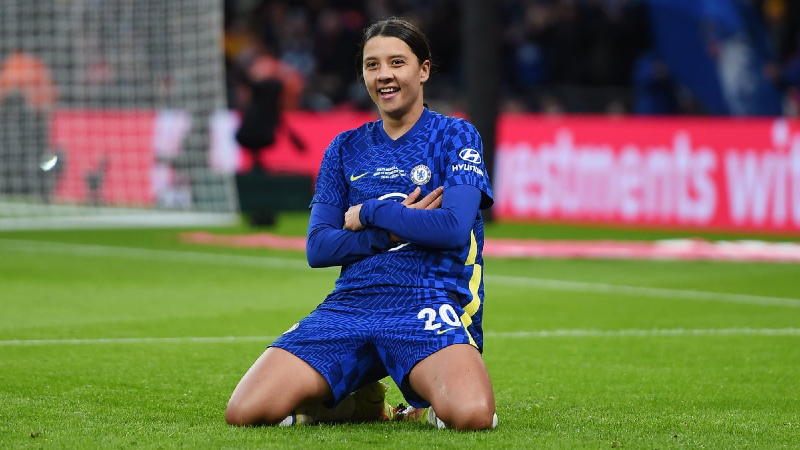 Sam Kerr scored a crucial goal to help Chelsea get past Tottenham 3-1, while Caitlin Foord was also on the scoresheet as Arsenal won 3-0 over Everton.

Kerr headed Chelsea ahead in the 71st minute, nodding in a pinpoint finish from a left-flank cross from Jonna Andersson.

The Matildas skipper had been well held with only a half-chance in the second half coming her way, with her poke saved by Spurs keeper Tinja Korpela.

Tottenham’s Kyah Simon started and played 68 minutes, laying off the pass for Rachel Williams who was brought down by Chelsea keeper Ann-Katrin Berger leading to her red card.

Caitlin Foord produced a fine left-foot finish to put Arsenal ahead in their 3-0 victory over Everton which keeps them one point behind Chelsea.

Foord had provided a well-weighted pass for Stina Blackstenius to hit the back of the net, only to be disallowed for a tight offside call.

But Foord opened the scoring in the 43rd minute, brilliantly controlling a lofted diagonal ball into the box before a drilled left-foot finish from an angle.

Steph Catley, who put in a full shift, was involved in the build-up for Arsenal’s third goal. Lydia Williams was an unused sub.

Alanna Kennedy put in a full shift while Hayley Raso was an unused sub as Manchester City won 4-0 over Leicester City.

Mackenzie Arnold played a full game and Tameka Yallop was a 68th minute substitute in West Ham’s victory over Reading.

Ellie Carpenter played a full game as Olympique Lyon won 3-2 over Paris Saint-Germain in the first leg of the UEFA Champions League semi-finals.

The second leg is due to take place in Paris next weekend. The winner will likely play Barcelona in the decider.

Katrina Gorry was in action, playing a full game for Vittsjo in a 3-0 win at AIK, who had Remy Siemsen put in a full shift up front.