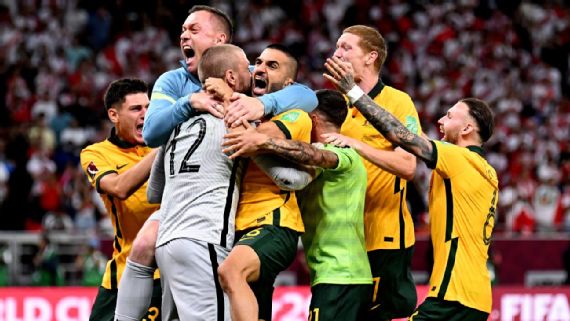 The Socceroos have qualified for a fifth straight World Cup, edging Peru 5-4 on penalties after a 0-0 draw with substitute goalkeeper Andrew Redmayne the hero in a dramatic penalty shoot-out triumph.

GGArmy‘s Ben Somerford watched all the drama and rated all our Socceroos on a famous night for Australian football.

Assured display throughout, barely tested with Peru coming closest with an extra-time header that hit the post. Ryan’s positioning was excellent and distribution was mostly good. Took a backseat for the shoot-out in a major call by coach Graham Arnold.

Much improved from UAE game, where he was exploited at right-back. Copped an early booking but didn’t seem to impact his game, although he didn’t adventure forward much. Taken off prior to extra-time given caution.

Outstanding performance from the veteran, who has only recently come back into the Socceroos fold. Made up for his technical deficiencies with good decision making, sound positional sense and plenty of strong headers. Excellent.

Has been a revelation during the playoffs, looking comfortable on the ball and dealing with more experienced opponents, such as Peru’s Gianluca Lapadula who beat him to an early header.

Has his limitations but put in a powerful display down the left before eventually cramping in extra-time. Ventured forward at times, including a great run where he came close with a right-foot shot. But was also reliable at the back and neat with his feet.

Brilliant effort to play the entire 120 minutes given his lack of gametime in the lead-up. Slotted his penalty when Australia were a goal down in shoot-out. Set the tone with his composure on the ball and ability to control possession and the pace.

Dogged display in midfield, pushing back and forward to offer good support to the more technical Mooy and Ajdin Hrustic. Got into the box for a few wayward headers where he might’ve tested Peruvian keeper Pedro Gallese and didn’t stop pushing until a very late cramp.

Buzzed around in the first half, providing the Socceroos’ main threat in attack with his willingness to take on the opposition defenders. Seemed to tire as the game wore on and missed the first spotkick in the shoot-out with a shot at a good height for Gallese.

More steady than brilliant. Struggled to get on the ball in the front third and didn’t create anything from set-pieces. Unable to convert a golden chance in the 88th minute on his preferred left. Didn’t stop throughout the 120 minutes and his ability to keep the ball was key to maintaining control and buying his tiring team-mates time. Cool penalty after his Europa League final heroics.

Not his best display, starting on the left flank and being moved into an advanced role upon Mitch Duke’s substitution. Relies on his power rather than skill and got isolated a few times. Had a few good moments.

Put in a gallant shift in attack for 69 minutes, but didn’t really offer much threat. Couldn’t hold up play and create when long balls were tried to relieve pressure. Had a few early half chances from range.

Replaced Duke with 20 minutes of normal time to go and had some bright moments, setting up the Hrustic chance down the left side. Showed calmness after a lengthy delay by Gallese to convert the fifth spotkick, before Andrew Redmayne’s moment.

Came on for Leckie in the 87th minute. Struggled for impact, unable to get on the end of any of the tiring service sent his way when outnumbered. Slotted his penalty to make it 4-3.

Replaced Atkinson after normal time given the younger right-back had been booked. Solid enough although naively turned the ball over once or twice.

Replaced the cramping Behich late but was basically brought on to take a penalty and converted it with aplomb.

Goalkeeper brought on late for the shoot-out which seemed a gutsy move by Arnold at the time but paid off. Redmayne’s clowning antics were unusual but were enough to put off Luis Advincula who hit the post, before his strong diving save from Alex Valera to clinch victory. Will go down in folklore.