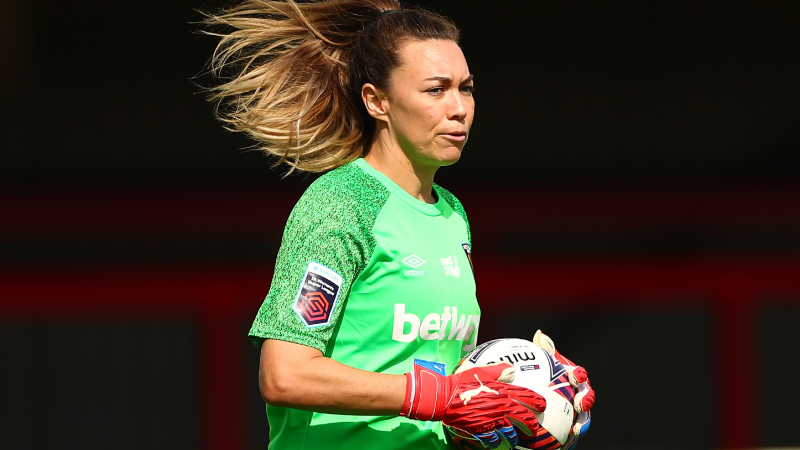 Mackenzie Arnold produced a string of fine saves as West Ham United upset Manchester City 2-0 in the English Women’s Super League on Sunday, while Sam Kerr added another goal to her tally this season.

Mackenzie Arnold was arguably the Player of the Match as City had 20-9 shots, with 7-5 on target, with the Matilda repelling them early, thwarting Lauren Hemp in a one-on-one.

The goalkeeper produced a strong one-handed block when wrong-footed from Jessica Park’s first-half effort, before saving well from Caroline Weir.

Late on with United up 1-0, Arnold pushed away Hemp’s shot, denied substitute Khadifa Shaw at the near post and also blocked Laura Coombs’ long-range effort after she had hit the post.

Hammers boss Olli Harder said: “Mackenzie Arnold is a quality goalkeeper, the saves she made today are saves that we see on a day-to-day basis in training. From a performance standpoint, she was excellent, but we expect that from her because she’s a quality goalkeeper.”

Tameka Yallop, who played a full game in midfield, forced a good save from City keeper Karima Benameur after goal scorer Dagny Brynjarsdottir stole the ball and found her inside the box. Yallop also glanced a header wide.

Hayley Raso (shoulder) was absent while Alanna Kennedy was an unused sub for City, who have lost three in a row.

Kerr courageously headed in Fran Kirby’s long diagonal ball in the 38th minute, beating onrushing goalkeeper Megan Walsh and Felicity Gibbons who clattered into each other.

Steph Catley put in a full shift, taking on set-piece duties, as Arsenal won 4-0 over Aston Villa, who were without Emily Gielnik.

Caitlin Foord was a 63rd minute sub for Arsenal while Lydia Williams was an unused sub.

Mary Fowler continued her good form with a strike off the bench in Montpellier’s 2-1 home loss to Fleury 91 in the French Feminine Division 1.

Fowler entered the fray in the 58th minute with her side 1-0 down and scored a consolation in the 94th minute with a classy finish after some neat control.

Ellie Carpenter put in a full shift as Olympique Lyon won 4-1 at Bordeaux.