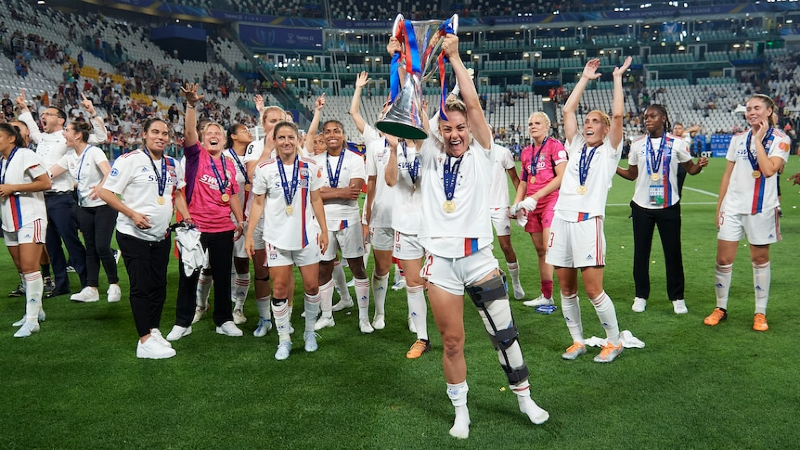 Ellie Carpenter was forced off with injury but whole-heartedly joined the celebrations as Olympique Lyon were crowned European champions with a 3-1 victory over Barcelona in Saturday’s final.

The French club claimed a 3-0 first-half lead in the Women’s UEFA Champions League final and never looked back.

But Carpenter was stretchered after only 14 minutes with a potentially serious knee injury, that will require scans.

The Matildas defender had required treatment in the ninth minute and tried to continue, but couldn’t soldier on.

Carpenter, however, was part of the celebrations, despite wearing a knee-brace and using crutches as she was awarded her medal and lifted the trophy.

On Sunday, Joe Montemurro won silverware as Juventus defeated AS Roma 2-1 in the Coppa Italia final. Montemurro also guided the Bianconeri to the league title and the Supercoppa this season, meaning he’s won the treble.

The Australian manager’s second-half substitutions, bringing on Agnese Bonfantini and Julia Grosso, proved decisive as they came from a goal down to win with two goals in the final 10 minutes.

Katrina Gorry netted a late winner as Vittsjo edged Orebro 1-0 in the Swedish Allsvenskan on Sunday. Gorry, who played a full game along with Clare Polkinghorne, scored in the 87th minute.

Jenna McCormick hit the scoresheet with a 55th-minute goal in AGF’s 6-1 win at Varde in the Danish women’s playoffs.