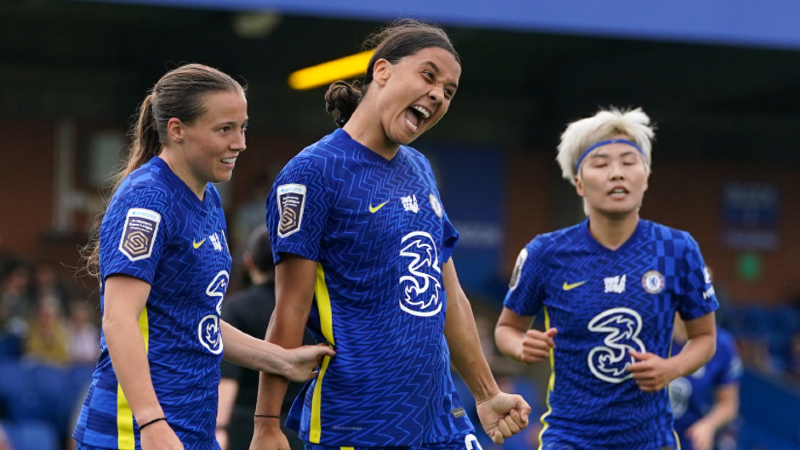 Kerr had a second-half goal disallowed for her offside, while she had further chances along with her teammates who were repeatedly frustrated.

But the Matildas skipper came up with the winner after a hopeful long ball forward was glanced on, with Kerr controlling into the box and then poking home, cuing a huge celebration.

The result means the Blues remain five points behind leaders Arsenal, but with two games in hand.

Gielnik was a 62nd minute sub for the Villans.

Caitlin Foord provided the assist for the opening goal as Arsenal won 3-0 over Brighton & Hove Albion on Sunday.

Steph Catley put in a full shift for the Gunners while Lydia Williams was an unused sub.

Alanna Kennedy and Hayley Raso came up against Kyah Simon as Manchester City won 1-0 at Tottenham. Kennedy and Simon both played full games while Raso got through 68 minutes.

Mackenzie Arnold was on the bench while Tameka Yallop was a 61st minute substitute as West Ham United won 1-0 at Birmingham City.

Ellie Carpenter put in a full shift as Olympique Lyon had a surprise 1-1 draw at bottom club Saint-Etienne in the French Feminine Division 1.

Mary Fowler started and played the first half only in Montpellier’s commendable 0-0 draw at PSG.

Beattie Goad was a 65th minute sub as Granadilla Tenerife won 1-0 over Sevilla in the Spanish Primera Division Femenina.