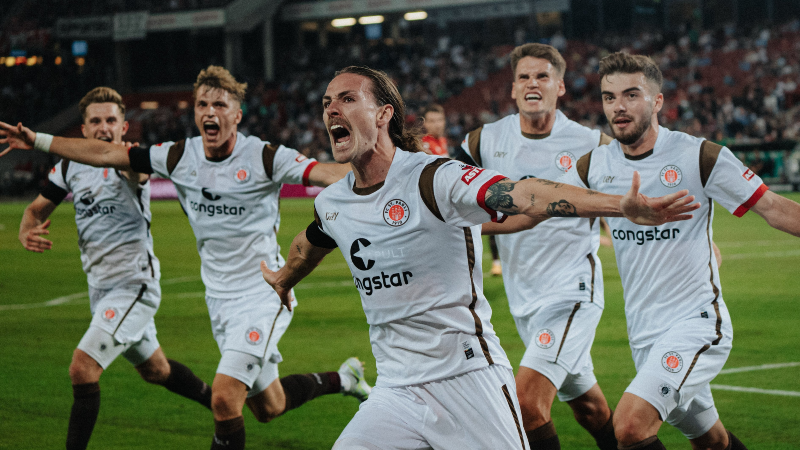 Connor Metcalfe made his 2.Bundesliga debut for St Pauli as Jackson Irvine netted a late equalizer in a 2-2 draw away to Hannover 96 on Saturday.

Irvine scored in the 95th minute to rescue a point for St Pauli, who had brought on Metcalfe, who moved from Melbourne City in the off-season, for his debut as an 81st minute substitute.

Socceroos midfielder Irvine had started the game and provided the decisive contribution with a close-range header after a scramble from Leart Paqarada’s left-flank free-kick.

The goal is Irvine’s second of the season which is only two games in.

Mitch Duke was also on the scoresheet in Japan’s J2 League in Fagiano Okayama’s 3-2 win at Albirex Niigata, taking his season tally to four league goals.

Duke made it 2-2 in the 47th minute with a glancing header from Kodai Sano’s cross into the box.

The Socceroo had provided the assist for Yudai Tanaka’s 13th-minute opener with some good hold-up play.

James Holland made his ‘second’ league debut for Austria Vienna in a 3-0 loss to champions Salzburg on Saturday, starting and playing 86 minutes.

Holland re-joined Austria from LASK last month, having spent three-and-a-half years with the club earlier in his career.

Jason Davidson debuted for new club KAS Eupen as an 87th-minute substitute in their season-opening 3-1 loss at Sporting Charleroi in Belgium’s First Division A. Jimmy Jeggo was absent.

Joel King was an unused sub as OB drew 202 at Randers in the Danish Superliga on Sunday.

Deni Juric played a full game while Anthony Kalik started and replaced in stoppage time as HNK Gorica drew 0-0 with Sibenik in the Croatian Prva HNL.

In transfer news from Scotland, Celtic confirmed they had signed Socceroos midfielder Aaron Mooy in midweek on a two-year deal. Mooy played as a 77th minute substitute in Celtic’s 2-0 win over Norwich City in a pre-season friendly on Saturday.

“Aaron’s not been training but the point of the experience today was to give him the matchday experience,” Postecoglou said post-match. “I know what Aaron’s like and he won’t take too long to get up to speed.

“It’s a big occasion any time you make your debut for a club at home, particularly at this football club. So I wanted to give them that experience today and I thought they acquitted themselves well.”

In the Scottish League Cup, fringe Socceroo Ryan McGowan debuted as a 72nd-minute substitute for St Johnstone in their 1-0 win over Ayr United. McGowan joined the Scottish Premiership club in midweek from Kuwait SC.

Keanu Baccus marked his debut for St Mirren with an assist as they won 3-1 over FC Edinburgh. Baccus got the pass for Jonah Ayunga’s goal to make it 2-0. Baccus started and played 73 minutes, along with Ryan Strain who got through 89 minutes.

Former Western Sydney Wanderers defender Phillip Cancar came off the bench to score for Livingston in their 2-0 win over Kelty Hearts. Cancar had replaced the injured Christian Montano in the sixth minute and netted in the 77th minute.