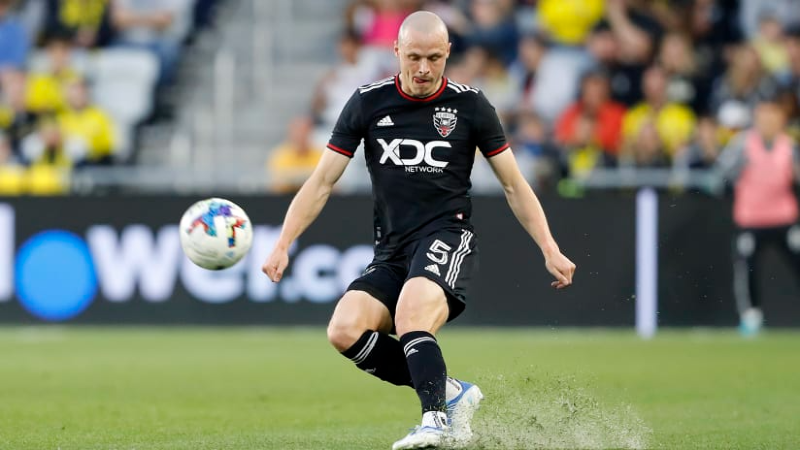 Brad Smith has confirmed he has torn his anterior cruciate ligament as DC United were hammered 7-0 by Philadelphia Union in the MLS on Saturday.

Former Liverpool full-back Smith had been brought into the game in the 42nd minute to inject some energy with United trailing 4-0 at the time.

But the fringe Socceroo had to be stretchered off in the 67th minute after going down injured, slamming his hand to the grass in frustration. He had tried to walk off the pitch but was unable and required the stretcher.

United’s interim head coach Chad Ashton said: “It doesn’t look good at this point but I don’t have any final idea.”

On Sunday, Smith confirmed the worst case scenario, having torn his ACL for a second time in his career, meaning he will be unavailable for the 2022 World Cup.

Milos Degenek was absent due to a minor hamstring injury as Columbus Crew came from two goals down to win 3-2 at Chicago Fire.

Elsewhere, Deni Juric was an unused sub as Dinamo Zagreb won the Croatian Super Cup 4-1 on penalties after a 0-0 draw with Hajduk Split.

Taggart, who has now netted three goals in his past seven games, calmly side-footed home from inside the box in the 63rd minute.

The Socceroo had been brought on in the 59th minute, with his strike making it 2-0, although he was replaced in the 76th minute.

Mitch Langerak was in goal as Nagoya Grampus lost 2-0 at home to Shimizu S-Pulse, while Stefan Mauk got an assist as Fagiano Okayama drew 2-2 at Oita Trinita in J2.

Mitch Duke put in a full shift for Fagiano, while Mauk started and played an hour, getting the assist for Kodai Sano’s 21st minute goal.

Aaron Mooy wasn’t in the Shanghai Port squad which won 1-0 at Guangzhou after negotiating an early release from his contract with the Chinese club, prompting speculation about his future.

Mooy has been heavily linked with Ange Postecoglou’s Scottish champions Celtic, having based himself in Scotland – where his wife Nicola hails from – for the past few months.

“There’s plenty of interest around the world for Aaron and we’re weighing up all the options,” Mooy’s agent Josh Barnett told FTBL. “There’s certainly no rush to make a decision.”